To share your memory on the wall of Anthony Patrizio, sign in using one of the following options:

Fr. Anthony was born on April 4, 1940 in Afragola, Naples, Italy to Vincenzo and Maria (Orabona). Anthony was ordained on May 21, 1966 at the Cathedral of the Immaculate Conception, Camden. He served at Holy Name Parish, Camden, Gloucester Catholic and Camden Catholic High Schools. He was a member of the Missionary of the Sacred Hearts of Jesus and Mary and served at Villa Pieta in Linwood as Vocation Director and became Rector in 1975 and also served as chaplain of Our Lady’s Residence. Anthony joined the Diocese of Camden in 2005 and served at St. Vincent de Paul until his retirement in 2012. Anthony continued to serve at St. Vincent’s until his death.

Anthony is survived by his brother Nicola Patrizio of Adragola, Naples, Italy, his six Nephews of Italy, 10 Nieces of Italy and great nephews and nieces.

In lieu of flowers donations in his memory may be made to St. Vincent de Paul Church, Mays Landing.
Read Less

Consider providing a gift of comfort for the family of Anthony Patrizio by sending flowers.

We encourage you to share your most beloved memories of Anthony here, so that the family and other loved ones can always see it. You can upload cherished photographs, or share your favorite stories, and can even comment on those shared by others.

Posted Feb 18, 2021 at 07:22pm
Not mentioned father Anthony was a good spiritual director of my mother and my brothers and sister and myself. He helped us through trying times after my mothers divorce by giving her many jobs at the Villa in Lynnwood and also working bingo for the missionaries. He was in attendance at my wedding and will be sadly missed.
Comment Share
Share via:
JA

Posted Feb 18, 2021 at 01:26pm
To our dear Father Anthony,
You were a very special friend to Dotti and me ever since we first met you in 2006. You became more than just a friend. You became an integral part of our family as well. We enjoyed many activities together, including classical concerts, a trip to Italy, dinners, and cocktails on our backyard terrace overlooking the garden. We love you Father, and we will miss you very much. May you now rest in peace with the Lord.

Posted Feb 17, 2021 at 04:16pm
Frank and Diana were very good friends with Fr. Anthony for over 10 years he was family to us. He will be greatly missed.
Rest In Peace dear friend we love you.

Posted Feb 17, 2021 at 03:53pm
I worked with Father many years ago.I taught at Holy Name Parish in North Camden. He was a Parish priest.
Rest in Peace my friend.
Comment Share
Share via: 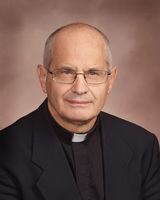