To share your memory on the wall of Francis Krasnoborski, sign in using one of the following options:

Print
Francis Krasnoborski, AKA "The Pope"

He grew u... Read More
Francis Krasnoborski, AKA "The Pope"

He grew up in Clifton New Jersey, and attended Don Bosco Technology Academy, graduating in 1967. He joined the Air Force in 1968, and served in Vietnam, specializing in weapons. Upon returning home in 1972, he joined his family in Sandusky Ohio, and enrolled at Bowling Green State University, earning associate degrees in mechanical and electrical engineering. Following graduation, he began working in the cable TV industry. His work took him to Galion, Ohio, Niles, Michigan, and Tuscola, Illinois, where he met the love of his life, Suze Davis. In 1981, he moved to Ft. Worth, Texas to start his own CATV engineering and design business, where he designed their entire cable TV system.

In 1982, Frank and Suze were married in Ft. Worth botanical gardens. In 1988, they moved to Absecon, New Jersey, where Frank continued to design cable TV for our entire South Jersey area for 19 years. He later went to work for Avalon Limousine, and enjoyed his work there until he retired in 2015.

Frank & his wife enjoyed singing karaoke, where he was lovingly given the nickname, "The Pope," and they became part of a wonderful karaoke family. His favorite songs to sing were, House of the Rising Sun, Ol' Man River, and Mountain Music, and he performed them well.

He was very caring and had a quick sense of humor, and he will be greatly missed by family & friends.
He leaves behind his loving wife, Suze and furbaby, Jersey. His sisters, Ripalda and Joetta Krasnoborski of West Caldwell, New Jersey. Brother and sister in law, Danny and Paulette Davis of Glendale, Arizona, and many beloved nieces and nephews and cousins.

A memorial service will be held in 2021.
Read Less

Posted Dec 31, 2020 at 03:54am
Suze your loss is everyone loss -- The Pope will be missed immensely. Eddie and I will always remember the conversation with the Pope when he used to drive us to the airports. Prayers to you and your family. Virtual Hugs
Comment Share
Share via: 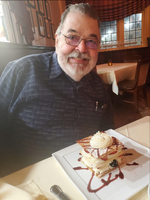