To share your memory on the wall of Gary Warrelmann, sign in using one of the following options:

Print
Gary “Tigger” Bennett Warrelmann Sr., 75, a beloved father, brother, uncle, grandpop and great-grandpop went home to be with the Lord on the evening of May 29, 2021, peacefully with his children by his side.

Gary served his country ... Read More
Gary “Tigger” Bennett Warrelmann Sr., 75, a beloved father, brother, uncle, grandpop and great-grandpop went home to be with the Lord on the evening of May 29, 2021, peacefully with his children by his side.

Gary loved racing and working on muscle cars, and enjoyed his years as an Auto and Diesel Technician. He had a passion for cooking and often contributed his culinary skills to his local VFW, American Legion and Fire Department. In his spare time, Gary enjoyed golfing, jigsaw puzzles, painting pottery and spending time with his family. Gary was a devoted member and actively involved in his church, Parresia Church, in Egg Harbor Township, NJ.

He is survived by his children: Sonya Pacera (Frank), Gary Warrelmann Jr. (Danielle), and Renée Clewell (Jeremy); his grandchildren: Brianna Kulzer (Geoff), Paige Clewell and Allete Clewell; and his great-grandchildren: Talon, Kaia and Brynlee. He is also survived and loved dearly by his brothers: Jim, Jack, Tommy and Terry; and several nieces and nephews.

Gary will be missed by many— he had a huge heart, contagious sense of humor, kind soul and was always eager to help others. His presence will remain forever in our hearts.

A viewing will be held on Sunday, June 6, 2021, from 6:00-8:00 p.m. followed by reflections at Boakes Funeral Home, 6050 Main Street, Mays Landing, NJ. There will be another viewing Monday morning 9:30-11:00 a.m. with services at 11. A full military burial will follow at the Atlantic County Veteran’s Cemetery, Estell Manor.
Read Less

Consider providing a gift of comfort for the family of Gary Warrelmann by sending flowers.

We encourage you to share your most beloved memories of Gary here, so that the family and other loved ones can always see it. You can upload cherished photographs, or share your favorite stories, and can even comment on those shared by others.

Posted Jun 04, 2021 at 04:22pm
Please accept my most heartfelt sympathies for your loss my thoughts are with you and your family during this difficult time. 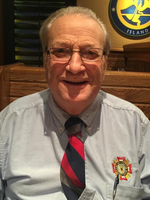