To share your memory on the wall of Gloria Zaccardo, sign in using one of the following options:

Gloria was born in Manhattan, NJ. Her parents were born in Poland, and upon their arrival to the United States their name was changed to Walker.

As a young girl Gloria rented a room from Joseph and Cecelia Zaccardo. Little did she know that her landlords son “Lou” would become her husband after he came home from serving our Country during World War II.

Gloria and Louis married on September 1st 1947 and in time had 3 children. Michael Joseph, Thomas Louis, and Lesly Marie.

They spent many happy years in Connecticut raising their children along side Lou’s sister Marie, her husband Chuck and their children. They loved spending long summers at Uncle Doug and Aunt Marys Maine cabin. In 1994 the couple moved to Mays Landing NJ and purchased a 31’ foot Silverton which they kept in Beach Haven NJ. They loved fishing and joined the Beach Haven Marlin and Tuna Club. With their children they won the Shark tournament 3 consecutive times.

Mickie was a wonderful homemaker, loved reading and doing puzzles. In her younger years she enjoyed sewing and made many beautiful outfits for her daughter Lesly, who has continued the talent she learned from her mother.

We encourage you to share your most beloved memories of Gloria here, so that the family and other loved ones can always see it. You can upload cherished photographs, or share your favorite stories, and can even comment on those shared by others.

Posted Jun 10, 2021 at 07:27pm
Mom I will miss you so much. I have a huge void in my life now. Until we meet again Mom. You were the best. A great role model of strength and compassion. Love Your daughter, Lesly.
Comment Share
Share via: 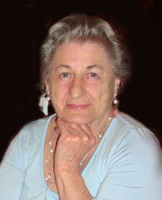