To share your memory on the wall of Gregory Gruver, sign in using one of the following options:

Print
Gregory Gruver Sr., a beloved husband, father, brother, and P-Pop, died suddenly in his Richland home on April 21st in the early hours of the morning.

He is survived by his loving wife of 45 years Donna, his children Stephanie Merlino, G... Read More
Gregory Gruver Sr., a beloved husband, father, brother, and P-Pop, died suddenly in his Richland home on April 21st in the early hours of the morning.

Gregory had a passion for cooking, and with that forged a 25+ year tradition of preparing Sunday dinners filled with family, friends, laughter, love, amazing food, and the occasional game of uno.

He pursued a career in construction, but his talents far exceeded those limits. He was a mason, a mechanic, a plumber, electrician, he knew heating and air conditioning, refrigeration, decking, siding, remodeling, and pretty much any type of work that used his hands. He was truly a “Jack of all Trades”.

Gregory loved animals, and was a wildlife enthusiast. His dream was to become a Park Ranger, just is life, those aspirations changed. Instead, he brought his admiration and love of animals home with him. At any given time, you could find some sort of creature crawling around the yard or flying inside the house. Just to list a few: baby skunk, flying squirrels, raccoons, turtles, fish, turkeys, chickens, lizards, snakes, guinea hens, baby owls, and several different breeds of dogs. He was always connected to Nature.

He will be missed by many, but his presence will be felt by all. There are no words that can describe the type of man Gregory Gruver Sr. was.

We love you so.

A viewing will be held on Sunday, April 25th from 1pm to 3pm at Boakes Funeral Home, 6050 Main St., Mays Landing, NJ, where a service will beheld at 3pm.
Read Less

Consider providing a gift of comfort for the family of Gregory Gruver by sending flowers.

We encourage you to share your most beloved memories of Gregory here, so that the family and other loved ones can always see it. You can upload cherished photographs, or share your favorite stories, and can even comment on those shared by others.

Posted Apr 24, 2021 at 11:32pm
As I lay here in my bed, I keep wishing that I’d wake up from a bad dream . I can’t wrap my head around the fact that my Uncle is gone . Anyone who knows me knew how much my Uncle Greg meant to me. Everywhere I went I was always talking about him or telling the funny things he would do. He was my go to person when I needed help or advice or just wanted someone to talk about Trump with. My Uncle was the type of man that no matter what the situation was you could always count on him! Boy Uncle Greg I’m really going to miss our conversations. Miss seeing you on holidays . Miss my great food you made me every time I came down to the house. Especially my cheesy noodles and homemade pizzas . But most of all I’m going to not only miss you as my Uncle but as my buddy too. My life will never be the same with you gone . My heart is going to hurt for a very long time . I want you to know that I really truly loved you. When you left you took a piece of me with you. I pray that now you have no pain and can once again be with Grammie and Grandpa. I know they were there waiting for you. Please watch over all of us now Uncle Greg and continue to protect us from Heaven. Uncle Greg, I can surely tell you I’m going to truly miss you so much but one things for sure I’ll never forget you. I’m going to try my very best to be good so one day I can see you again. I can’t promise I’ll make it to Heaven like you but I will try. Until we meet again uncle Greg you soar high with the Angels. I love you uncle Greg.

Posted Apr 24, 2021 at 11:11pm
Greg was a man that was rough and tough on the outside but so caring and loving on the inside. I have so many wonderful memories. To be honest with you, ALL the memories were unforgettable.

Greg was not only my brother, he was my partner in crime. My Dad was just finishing up caulking a glass door panel. Greg and I decided to throw shoes at each other. Greg threw the shoe at me first and whacked me with it. In retaliation, I threw it back. He ducked, it flew over my Dad's head and through the glass panel. My Dad wasn't happy. Also the time we managed to get into the medicine cabinet above the bathtub to find out where Mom put the candy bar. Come to find out, it was not a candy bar but an Ex-Lax bar. Mom had us cheek to cheek on the bowl.

Dana asked me, "Mom who is going to make me my cheesy noodles?' "Who's going to make my pizza?" "Who am i going to talk about Trump with?" These simple little things Greg did is why we are going to miss him so much.
Just Sunday we talked on the phone for an hour. I was really relieved to hear how strong he sounded.

The last words you told me was, "I love you." I love you too Greg with all my heart.

Gregory Gruver thank you for being you. You will always be in my prayers and in my heart. Eternal love.

Posted Apr 24, 2021 at 10:27pm
Ray and Margaret Staffieri and Family , would like to send our sincere sympathy to the Gruver family .We know how close you all were to each and the love you shared.Though your heart must hold deep sadness it also holds the many blessings of the life you shared and love that you will always be part of you .Keeping you close in Caring Thoughts and Prayers,
Margie and Ray and Family 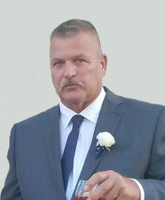