To share your memory on the wall of James Scott, sign in using one of the following options:

Son of the late William and Florence Scott, Chip will be forever missed by his daughters Courtney Humphrey (James) and Master Sergeant, Lauren Humphrey (Eric) as well as his very favorite people, his grandchildren Jimmy, Jayson, Eric, Madison, and Justin. He also leaves behind his sister-in-law, Sandra Scott, and brother-in-law Jack McCallum (Donna) as well as many other close family and friends. Chip is predeceased by his wife of 43 years, Pam McCallum Scott. Also preceding him in death was his son, Chad Scott, and brother William Scott.

Chip was a lifelong member of Local 322. He traveled to France several times, as well as to Italy, Germany, and other countries in Europe with his wife. Chip truly enjoyed golfing with his close friends and traveling as far as Ireland to enjoy new and different courses. But most of all, he enjoyed spending time with his grandchildren. He was a fixture at their sporting events and activities and always there to support them in everything they wanted to try. The lessons he passed down to them will be his legacy.

Services will be held at Boakes Funeral Home, 6050 Main St., Mays Landing, on Tuesday, February 23rd at 12pm. Friends may visit one hour prior to the service. Interment will be with his wife and son at Union Cemetery immediately following the service.

For those who wish, in lieu of flowers, memorial contributions in Chip’s memory may be made to the Presbyterian Church, 6001 Main St., Mays Landing, NJ, 08330.
Read Less

Consider providing a gift of comfort for the family of James Scott by sending flowers.

We encourage you to share your most beloved memories of James here, so that the family and other loved ones can always see it. You can upload cherished photographs, or share your favorite stories, and can even comment on those shared by others.

Posted Feb 23, 2021 at 05:51pm
Our sincerest condolences go out to Courtney and Lauren on the passing of your father. May the blessings of heaven and your friends be with you now and forever.
Bob & Janice Lawless
Comment Share
Share via:
WM

Posted Feb 22, 2021 at 07:04pm
May Peace be with all family and friends. With fond memories, RIP Chipper
Cousin Bill & Dolly McArdle
Comment Share
Share via:
RR

Posted Feb 22, 2021 at 09:40am
So sorry to hear the about the passing of Jim! I worked for Jim as He was my Foreman on a Job in Camden in the early 90's. He was a class act ,and a Gentleman. To the Scott family,my condolences.RIP Jim
Comment Share
Share via:
KC

Posted Feb 21, 2021 at 11:34am
We enjoyed Pam and Chips company as good friends for so many years. Our hearts are filled with sorry for his loving family he leaves behind. We've traveled with Pam and Chip a number of times in Europe and have enjoyed many experiences together, along with countless good laughs. We will truly miss Chip. Rest in peace, our friend. I'll raise a "Mule" to Chip when we get back to NJ.
Comment Share
Share via: 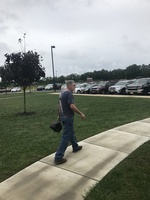