To share your memory on the wall of John Fenske, sign in using one of the following options:

Print
John David Fenske of Egg Harbor Township has departed from us on April 23rd,2021. John “Johnny on the spot”, was born on the beautiful day of September 5th, 1988.

John grew up with two brothers, and a sister, who loved and cherishe... Read More
John David Fenske of Egg Harbor Township has departed from us on April 23rd,2021. John “Johnny on the spot”, was born on the beautiful day of September 5th, 1988.

John grew up with two brothers, and a sister, who loved and cherished him. They laughed, and played, and caused mischief everywhere they went. They grew up playing all different sports, of which John was the best at most. John was great at every sport, however, he excelled in baseball, being an all-star pitcher, and always the clean up batter, as he could hit the ball like Babe Ruth! John also loved his BMX bike, always making new and challenging trails and jumps, that he rode as ferociously as the trails and jumps looked. Always first in line to ride, and always first to cheer someone else on. He never gave up, even through his injuries. He once took his handles bars through the top of his leg, in which he joked “A few inches more and the girls would have been disappointed!”. John had a strong sense of humor and loved playing and joking around with his friends.

John was always the life of the party. He had a wild and free spirit, never letting any obstacle in his path, for better or worse. Once he set his mind to a task, he followed it through to the very end. He was exceptionally good at solving problems, and making them, he would say as he laughed. John loved to have a good time, always a people person, always ready to make friends, and live life to the fullest. He always took anything he did to the next level, and always had fun doing so. Wherever he was, you could always find him with a smile on his face.

John had more friends then could be counted, and a ton of people who cared for him. All his brothers and friends who nick named their group “the royal best crew”, with Nate Schaeffer, Albie Rocks, Andre Echeveria, and others. He would always help friends where he could, and always received help when he needed from those very same friends and family he loved so much. John always wanted to be doing something, weather hanging out with friends or playing sports or riding his bike, he always had someone with him.

John was nick named “Johnny on the spot” by his family because of his ability to always get things done. He always knew what to do, and when to do it. He was a very caring and loving person, who could always find the good in people. John was a very charismatic person, a hard worker, a hard worker, an animal lover, and very down to earth which is why John had so many people who loved and cared for him.

The last few years of Johnny’s life, he was seeking peace. Something which had eluded him for a short while. At last, however, he has found it. God saw that you were tired, and a cure was not to be, so his put his arms around you, and whispered come to me. With tearful eyes we watched you, and saw you pass away, although we love you dearly, we could not make you stay. A golden heart stopped beating, hard working hands at rest, God broke our hearts to prove to us, he only takes the best. John has found his peace, now resting with his older brother, and best friend Daniel Scott Fenske.

John had so much love in his heart for those closest to him, especially for his son, Jameson Daniel Fenske, his blood, who will always be nearest and dearest to his heart. We will forever miss you, cherish your memory and love you.

Family and friends are invited to gather at Boakes Funeral Home on April 30th at 9:00 a.m. to 11:00 am to say our goodbyes to john David Fenske as he ascends for his final voyage. The services will be followed by a mass, at 11:30 a.m. at St. Vincent ‘s Church in Mays Landing. John will take comfort in knowing all the love he has from friends and family.
Read Less

Consider providing a gift of comfort for the family of John Fenske by sending flowers.

Posted Apr 28, 2021 at 07:38pm
Thank you for being such a big part of my childhood. I’ll never forget all the days spent playing hockey in the street, riding bikes, manhunt, jumping on the trampoline, painting the treehouse, and all the other mischief we got into growing up. I will always cherish the memories we shared between both our families. My heart hurts for the whole Fenske Family. -Becca (Rocks) Bent
Comment Share
Share via:
ER

Posted Apr 28, 2021 at 10:26am
We are so sad to hear of John's passing. We have so many wonderful, happy memories of John growing up in the neighborhood. We will take comfort knowing that John and Dan are playing manhunt with the angels. xoxo. The Rocks Family
Comment Share
Share via: 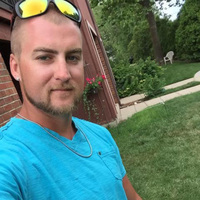