To share your memory on the wall of John Mosentoff, sign in using one of the following options:

John is predeceased by his mother, Janina Mosentow and Father Feodor Mosentow. He leaves behind to cherish his memory, his son Robert Mosentoff and partner Catherine Brandon, his son Frank Mosentoff and wife Brenda Mosentoff, and his grandchildren: Robert Julian Mosentoff, Francesca Marie Mosentoff and Kristina Renee Mosentoff.

John will be remembered for his hard work and dedication to his craft, his strong sense of loyalty and independence.

A special thank you to everyone involved in John’s care from Bayada Hospice, for their compassion and care; especially Rebekah, Mary-Beth, Marie, Victor, Hunter and Ryan.

No service will be held. If anyone would like to make a donation, please do so to your favorite charity.
Read Less 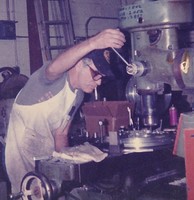