To share your memory on the wall of Rudolph Williams, sign in using one of the following options:

Rudy was educated in South Egg Harbor, New Jersey and graduated from Oakcrest High School in Mays Landing, New Jersey in 1962. Soon thereafter he enrolled in the United States Army. He toured Korea, Thailand, and Germany as a PFC E3 Regular Army Artillery and Canine Handler until he was honorably discharged in 1966. Once he returned home, he enrolled into Atlantic Community College and graduated with an Associates Degree in 1975.

After the military, he worked for over fifteen+ years at the 30th Street Station - Post Office in Philadelphia, Pennsylvania. He worked for a small period at The Smithville Inn, in Smithville, New Jersey as a short order cook but eventually left to work as a chef at Trump Plaza until his retirement.

Rudy was known for his cooking and grilling. He made the best steaks, prime rib, sandwiches, and fried chicken. Rudy loved to dress and often had his clothes made especially for him by a tailor. He loved music, especially Nancy Wilson. The immense love he had for his brothers, sisters, children in the family and especially Shonna, Rudy, Jr., and his grandchildren went without saying.

Rudy was predeceased by his mother and father, Arlene and John Williams.

Public pass thru viewing will be held from 11am-1pm on Saturday, May 15th at Boakes Funeral Home, 6050 Main Street, Mays Landing, NJ. Funeral service will be private. Friends and family are invited to the committal service with Military Honors at Egg Harbor City Cemetery, Moss Mill Road & Hamburg Avenue at 3:30pm. Masks are mandatory.

Sorrowfully and Humbly Submitted
The Family

And when great souls die, after a period peace blooms.
Slowly and always irregularly. Spaces fill with a kind of soothing electric vibration.
Our senses, restored, never to be the same, whisper to us. They existed. They existed.
We can be. Be and be better. For they existed.
Read Less

Consider providing a gift of comfort for the family of Rudolph Williams by sending flowers.

We encourage you to share your most beloved memories of Rudolph here, so that the family and other loved ones can always see it. You can upload cherished photographs, or share your favorite stories, and can even comment on those shared by others. 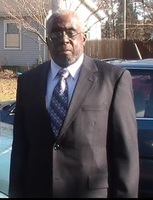