To share your memory on the wall of Russell Pratt, sign in using one of the following options:

Born in Camden, NJ, on August 1, 1935, Russell relocated to Egg Harbor Township where he lived with his wife of almost 68 years, Sarah. ... Read More
Russell J. Pratt, Jr. of Egg Harbor Township, passed away after a short illness on January 5, 2021.

Born in Camden, NJ, on August 1, 1935, Russell relocated to Egg Harbor Township where he lived with his wife of almost 68 years, Sarah. There they raised two daughters, Darlene and Mary Jane (Candy).

Russell was a hard-working self-employed roofer for much of his life. He enjoyed horses, cars, western movies and playing cards.

Sarah, Darlene and Candy were his greatest loves, which eventually grew to include his sons-in-law George and Larry. He adored and cherished spending time with his four grandchildren – Michael (Jennifer), Jodi (Jason), Timothy (Astar) and Jennifer (Tony). His nine great-grandchildren – Cassandra, Gabriel, Aidan, Isabella, Logan, Tyler, Harper, Hailey and Brody - loved their Poppy.

Russell was pre-deceased in death by his parents Russell J. Sr and Mary Jane and his granddaughter Jennifer.

Services will be private.
Read Less

We encourage you to share your most beloved memories of Russell here, so that the family and other loved ones can always see it. You can upload cherished photographs, or share your favorite stories, and can even comment on those shared by others. 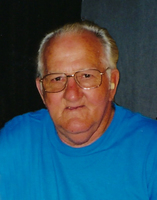