To share your memory on the wall of Thomas Shields, sign in using one of the following options:

He completed his internship and residency at St. Vincent’s Hospital, NYC where he specialized in Obstetrics and Gynecology. It was there he met his wife of 51 years, Patricia Sweeney Shields.

They have three children; Colleen Bland of Atlanta, GA wife of Michael and mother to Kelson Kieran, and Keegan; Kerry Shields of Ardmore, PA wife of Bryan Fenstermaker and mother to Davin, Macy, and Grady; and his son Drew Shields of New York City. Tom was a treasured Papa to his grandchildren.

For 45 years, Dr. Shields practiced as an OB-GYN at Lansdale Medical Group and later founded The Center for Women’s Health with his good friends and partners Dr. Bob Filosa, Dr. Dipti Shah, and Dr. Kathy Sappinaro. Shortly after, another friend Dr. Don DeBrakeleer joined them. He enjoyed his work and delivered over 6000 babies in his career. Thomas also served as president of the medical staff at North Penn Hospital, where his practice was affiliated.

Print
A celebration of life will be held at a later date.

We encourage you to share your most beloved memories of Thomas here, so that the family and other loved ones can always see it. You can upload cherished photographs, or share your favorite stories, and can even comment on those shared by others.

Posted Feb 07, 2021 at 10:42am
Dr Shields was my doctor for many years and delivered one of my sons. He was a kind, caring, and compassionate doctor who was always encouraging and positive. I am thankful I knew such a gentleman, and I am so sorry for your loss. Thoughts and prayers, Marie Hoffman
Comment Share
Share via:
GD

Posted Jan 30, 2021 at 05:36pm
I wanted to express my condolences to Pat and her children. I am so very sorry for your loss. I worked for Dr. Shields for many years at CFWH. I can remember he always spoke to the patients with such calmness and always reassured them with a smile that "everything is perfectly normal!" He was a very predictable physician and was easy to work with. Some of his past stories are ones I will remember forever. His patients always spoke the best of him to the staff. He will be missed but not forgotten.

Posted Jan 30, 2021 at 12:08pm
Our deepest condolences on the passing of a wonderful Dr.
Our prayers are with the Family at this most trying time,
Comment Share
Share via:
DS

Posted Jan 27, 2021 at 10:04pm
My prayers for Tom's family and extended family. So sorry for your loss.
God be with all of you.
Donni Shields
Comment Share
Share via: 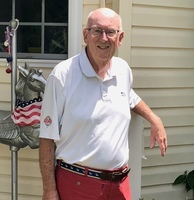