To share your memory on the wall of Veronica Schwenger, sign in using one of the following options:

Print
Veronica Schwenger (Turvey), 82 of Mullica Township, passed away on December 31, 2020 after a courageous battle with soft tissue sarcoma.

Born January 25, 1938 in Philadelphia, she lived most of her life in Atlantic County. She worked... Read More
Veronica Schwenger (Turvey), 82 of Mullica Township, passed away on December 31, 2020 after a courageous battle with soft tissue sarcoma.

Born January 25, 1938 in Philadelphia, she lived most of her life in Atlantic County. She worked for AtlantiCare for many years as a unit secretary.

She is survived by her daughter Esther (Bart), her son Michael Wildonger (Gail) and step-son Howard Schwenger, Jr. (Sherry). She is also survived by her grandchildren Douglas (Lauren), Lucas, Matthew, Marc, Chloe, Mason, and Tracey (Tom).

A private burial will be held at a later date.
Read Less

We encourage you to share your most beloved memories of Veronica here, so that the family and other loved ones can always see it. You can upload cherished photographs, or share your favorite stories, and can even comment on those shared by others.

Posted Jan 01, 2021 at 08:22pm
Ronnie was the best Unit Secretary. It was a privilege to work with her. Rest in Peace.
The One South team will forever hold you dear in our hearts. My sympathy and prayers for her family.
Diane Mohr
Comment Share
Share via: 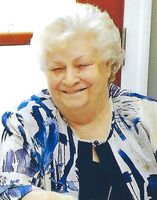