To share your memory on the wall of Catherine Boerner, sign in using one of the following options:

She is survived by her children Jean Boerner of Mays Landing, William Boerner, Jr. of Mays Landing, and Deborah (Michael) Ein of Hammonton, as well as granddaughter Adela Ein and grandsons Garrison Ein and Wesley Ein, all of Hammonton. She also leaves to cherish her memory three brothers-in-law, a sister-in-law, and three or four generations of nieces and nephews.

Catherine was a graduate of Frankford High School, Class of 1942 and she moved with her family to Cape May County in the late 1940s. She worked as a bookkeeper for Collins Lumber in South Seaville before marrying “Bill,” who she met at the roller-skating rink in Ocean City. In 1953, she became a farmer’s wife, a much different life than she had known growing up in Philly. She adapted wonderfully to raising her family on the farm, as she helped with picking blueberries, apples, and string beans, and learned with ease the art of canning fruits and vegetables. Cass, as she was also known, was an exemplary homemaker and baked layer cakes from scratch for family birthdays and other celebrations. Family was everything to her, and she never missed sending birthday cards to every member of her large extended family. The house on the hill, built by Bill and furnished with love by both of them, was where Cass hosted many family celebrations, since it was located halfway between Philly and Cape May. These included an annual birthday party for her mother, who lived with the family from 1963 to 1993. In the 1970s, Catherine was a proud Oakcrest Band parent and through the years, she encouraged her children in everything they did. She quietly inspired them and everyone around her to simply “do good, be good.” She enjoyed traveling and when home she liked watching the TV game shows. Cass was a whiz at math and could do calculations in her head. She also enjoyed doing word search puzzles and instilled in her kids a love of learning. She was our rock and leaves an enormous void in our lives but is now reunited with loved ones in Heaven. She was an active member of the First United Methodist Church and the United Methodist Women in Mays Landing for 65-plus years.

The family thanks Angelic Health for their care and support these past two months.

Due to the coronavirus pandemic, a graveside service will be held on Tuesday, May 4, at 11:30 a.m., officiated by Pastor Linda Ross at Union Cemetery, Somers Point-Mays Landing Road. Information and condolences at www.boakesfuneral home.com

In lieu of flowers, contributions should be made to First United Methodist Church, 6011 Main St., Mays Landing, NJ 08330.
Read Less

Consider providing a gift of comfort for the family of Catherine Boerner by sending flowers.

We encourage you to share your most beloved memories of Catherine here, so that the family and other loved ones can always see it. You can upload cherished photographs, or share your favorite stories, and can even comment on those shared by others.

My deepest sympathy to Jean, Bill & Debbie. It is never easy to lose someone you love - I hope you can find comfort in knowing that your Mom was loved by everyone who knew her. Aunt Cass inspired those around her to "do good" and "be good" because she lived her life by those words - She was not only a sister to my Mom ("Dotsy"), She was a dear friend....... my Mom often told me - "Cass is so good". We are so blessed to have had such great women in our lives.
Comment Share
Share via:
EB

Posted May 03, 2021 at 03:12pm
How do you put a lifetime of memories in a few short words ? How do you express what someone has meant to you? Some of my earliest memories had my aunt Catherine in them. As a child working in the blueberry fields ,my mom and Aunt Catherine managed the brood of us kids every day. I am sure their conversations were filled with talk of us ,their husbands ,what they were making for dinner, and countless other things that were on their hearts as they spent hours together in the field. What a special bond they must have had. When my mom was in the hospital Aunt Catherine cared for us until my dad would get home from work. Her steadfast care was a comfort to a little girl who didn’t understand what was going on.
She was known for her baking skills. She made the best chocolate cake and would make one for my dad each year on his birthday . Family barbecues would have her baked goods to look forward to: Chocolate crumble or cherry cake. Fortunately, she shared her recipes and every time I make or have one of her specialties I think of her. Life marched on, but whenever I would see her she would have a hug and a smile. When I would visit her in recent years I wanted to give her what she always gave me - love. And when I would leave it would impress me that she was still giving the quiet care she always had and I was the one blessed. My prayers for her when she was older, when she lost her husband , when she was not well , and when I couldn’t hug or visit her were that she would know and feel the comfort of the Savior and that she now rests in His arms.
Comment Share
Share via: 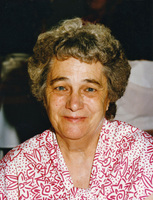