To share your memory on the wall of Gary Silverstein, sign in using one of the following options:

Gary was born May 20, 1955 in Brooklyn, NY. As a child, Gary’s... Read More
Gary Scott Silverstein, age 65, of Egg Harbor Township, NJ, passed away Wednesday January 20th at Temple University Hospital due to complications with the COVID-19 virus.

Gary was born May 20, 1955 in Brooklyn, NY. As a child, Gary’s family lived in Brooklyn and Chicago and finally settled in North Miami Beach, Florida where he spent a childhood riding bikes, playing football in the street outside his family’s home, and hanging around town with his friends. He loved telling stories about his time spent there. He graduated from North Miami Beach High School.

After high school, Gary worked in various jobs until his love of country led him to joining the United States Air Force in 1976 as an Air Traffic Controller. In the Air Force, Gary was able to see the world. He was stationed in places like Aviano, Italy; Incirlik, Turkey; and Spangdahlem, Germany (where he met his wife of 28 years, Donna), as well as many other places stateside. Gary served in the Gulf War while stationed at Incirlik, Turkey. He retired in 1998.

After retirement from the Air Force, he worked as an Air Traffic Controller at Trenton-Mercer Tower from 2000 – 2002, and then worked as a contractor with the Federal Aviation Administration at the William J. Hughes Technical Center until 2009.
Given the gift of life, Gary was the recipient of donor lungs. In 2016, Gary had a double lung transplant and enjoyed spending time getting to know his donor, Duncan Heidler’s, family. He was so thankful for their incredible generosity and the opportunity to spend more time with the people he loved most, his family.

Gary will have a graveside service with Military Honors on Sunday January 24, 2021 at 1:00pm at the Atlantic County Veterans Cemetery, located in Estell Manor Park, 109 NJ-50, Estell Manor, NJ. In lieu of flowers, donations may be made in Gary's memory to the American Lung Association https://www.lung.org or to the memorial fund of Gary's lung donor: Duncan Heidler Memorial Fund, 417 Summerhill Rd., Berwick, PA 18603.

Due to the COVID-19 pandemic, we will not be having a gathering after the services. We hope that you will join us for a Celebration of Life to be planned at a future date.
Read Less

Consider providing a gift of comfort for the family of Gary Silverstein by sending flowers.

We encourage you to share your most beloved memories of Gary here, so that the family and other loved ones can always see it. You can upload cherished photographs, or share your favorite stories, and can even comment on those shared by others.

Posted Jan 24, 2021 at 03:02pm
We are truly devastated, he was such a great guy. We will MISS him very much. our memories are all we have now, god bless you gary, you are no longer suffering . rest in peace.
MARK & PAULA
Comment Share
Share via:
E

Posted Jan 23, 2021 at 09:29am
Heart felt condolences to Donna and family. Donna & Gary made me welcome as one of the family. Gary you will be missed, the Lord has welcomed you with opened arms. You have definitely earned your wings my friend ❤️🌹🙏. May God Bless and Guide Donna through this time of healing. I know in my heart you will be with her and guiding her. 🌹🌹🌹
Comment Share
Share via:
BW

Posted Jan 22, 2021 at 09:54pm
We were so honored to meet Gary and Donna at Duncan's Memorial Golf Tournament and to have Gary blow out the candles on Duncan's birthday cake was more than we could of asked for. I am so sad that we won't get to make more memories. My heart and thoughts are with you all. I am sure he was a really fun guy to be around. Sending all my love.
Comment Share
Share via:
KM

Posted Jan 22, 2021 at 09:01pm
My deepest condolences to all your loved ones you leave behind. Your kindness over the years to me and my daughter will forever be remembered, as will your love for my sister Donna, Meredith and Matthew and all your grandbabies. I am imagining you being with your mom and Layla, sitting in your chair chewing on hard Werther's candies and watching The Big Bang Theory and laughing your butt off. I was fortunate to be able to get one final text in with you the night before you were put on the ventilator and I am so grateful that I did. I will miss you, G, and know that you are no longer in pain and resting in peace. Love, Kris, Darryl and Brittany. 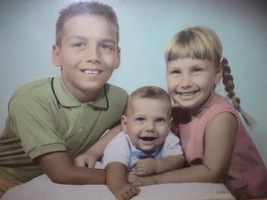 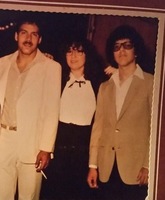