To share your memory on the wall of Patricia Callahan, sign in using one of the following options:

After years being the best stay-at-home mother ever, Pat embarked on a career as a blackjack dealer when Golden Nugget was first opened. Later, she worked as a scheduler for a medical practice. She took many college courses during her life, and instilled in her children and grandchildren the importance of education. She was proud that each of her three daughters graduated from college, becoming a teacher, school psychologist and lawyer. She was even more proud to be Mom Mom to her seven grandchildren.

Pat’s heart broke on July 6, 2012 when her oldest daughter Patti Ann (Callahan) Stard passed away. She was happiest when she was with her family, especially spending time in Ocean City at her daughter Sherri Michel’s house. She loved celebrating holidays, shopping, and vacationing all over the world with her family. She was a life-long Democrat who believed in our duty to help those in need. Pat was beautiful inside and out, and had a magnetic personality that attracted people to her wherever she went. She will be greatly missed by her family and friends.

In addition to Sherri and Christie, Pat is survived by her brother, Raymond Styles, her three sons-in-law, Mick, Charles and Thomas, her seven precious grandchildren, Marie (25), Christa (21) and Noelle (21) Michel, Colin (23) and Thomas (16) Stard, and Callie (13) and Ciana (9) Comerford, and her dog, Coconut.

Family and friends are invited to pay their respects on Thursday, May 20, from 9:30 – 10:30 AM at Boakes Funeral Home, 6050 Main St., Mays Landing. A Funeral Mass will be held at 11:00 am at St. Vincent de Paul Church, 5021 Harding Hwy., Mays Landing. Entombment will follow at Holy Cross Cemetery.
Read Less

Consider providing a gift of comfort for the family of Patricia Callahan by sending flowers.

We encourage you to share your most beloved memories of Patricia here, so that the family and other loved ones can always see it. You can upload cherished photographs, or share your favorite stories, and can even comment on those shared by others. 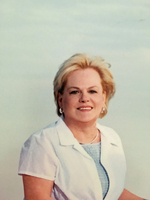